Instructions for Laboratories
Home / About Us / Our Team / Biological Safety / Jay Schroeder, MS 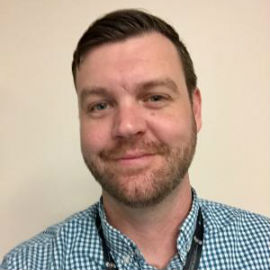 In 2010, Jay joined the Great Lakes Regional Center for Excellence/Howard Taylor Ricketts Laboratory at University of Chicago. There, he developed the aerobiology program to aerosol challenge small animals with select agent pathogens. Based on the standard operating procedures developed and the preliminary data generated using non-select agent bacteria, the CDC granted approval to use select agents in the aerobiology program in 2012. Jay also participated in other select agent research while at the Great Lakes Regional Center for Excellence, including studies on Yersinia pestis, the causative agent of plague, and Bacillus anthracis, the causative agent of anthrax disease.

In 2012, Jay joined the lab of Wyndham Lathem at Northwestern’s Feinberg School of Medicine in the department of microbiology and immunology. There, he managed the select agent Yersinia pestis lab and participated in research into the role of the Y. pesits pla protease in the manipulation of the host fibrinolysis pathway.

In 2016, Jay joined the University of Chicago Office of Research Safety in the role of laboratory safety specialist for the Biological Sciences Division. He is now a Biological Safety officer who interacts with the chemical safety officers, the Radiation Safety Program, principal Investigators, and laboratory staff to promote a culture of safety at the University of Chicago. Jay also provides input into University-wide research safety standards, policies, and procedures, as well as the allocation of roles and responsibilities for research safety between the Office of Research Safety and the divisional laboratory safety specialists.